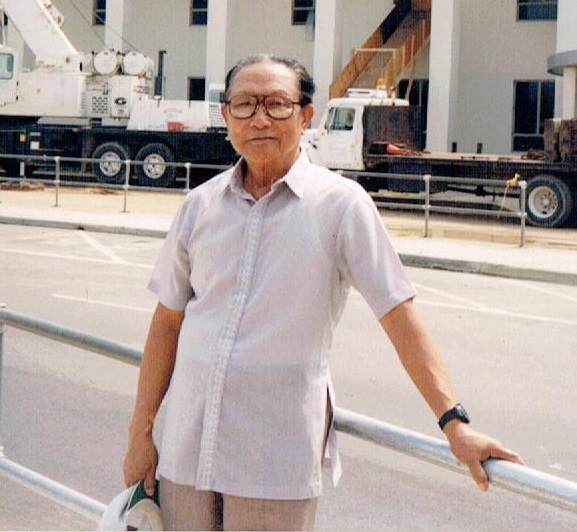 When I went as Balik Bayan in 1993 to Bangued during the Holy Week, there was a Class Reunion of the Colegio del Sagudo Corazon, New College of the Sacred Heart, High School which I attended.  I was the only alumnus alive in my class who was there and, being the oldest alumnus, I was asked to say the Invocation and to be a Guest Speaker during the Program.  A video tape of that program was taken, which I brought to Tampa.

I opened my speech with the story about a maid of Mrs. Solivan from Abra who was heard answering the telephone and cursing the caller:  “Botom met a!”  When asked by Mrs. Solivan why she answered that way, she said that the calling party said “OKIM!”  Mrs. Solivan, who was on the extension line, said:  “Saan, nokkong,” OKAY, “conana.”  (No, he said “Okay”).

Then I made an observation that in front of the church is the tablet containing the Ten Commandments.  I said that the new commandment of Jesus Christ is LOVE.

I ended my speech quoting the verse of John 3:16, “For God so loved the world that He gave His only begotten son so that those who believe in Him will not die but have life everlasting.”  Praise the Lord!

I have several pictures taken during that program.

That was “Sabado Gloria”, or Good Saturday.

The following day, Easter Sunday, I stood side by side with the 1934 graduating class alumnus, Jose (Pepito) Valera, ex-Governor of Abra and father of the incumbent Governor, viewing the Easter Program in front of their house from his room window.

I remember as a child looking up, viewing the angel taking away the veil of Virgin Mary, but this time I was looking down from the Governor’s window.

The little angel is the granddaughter of the ex-Governor.  His wife, Bolet Paredes, used to be the “angel” many years ago!

The heavy rains flooded the rice paddies where we … END_OF_DOCUMENT_TOKEN_TO_BE_REPLACED

In the month of May when the rains started … END_OF_DOCUMENT_TOKEN_TO_BE_REPLACED