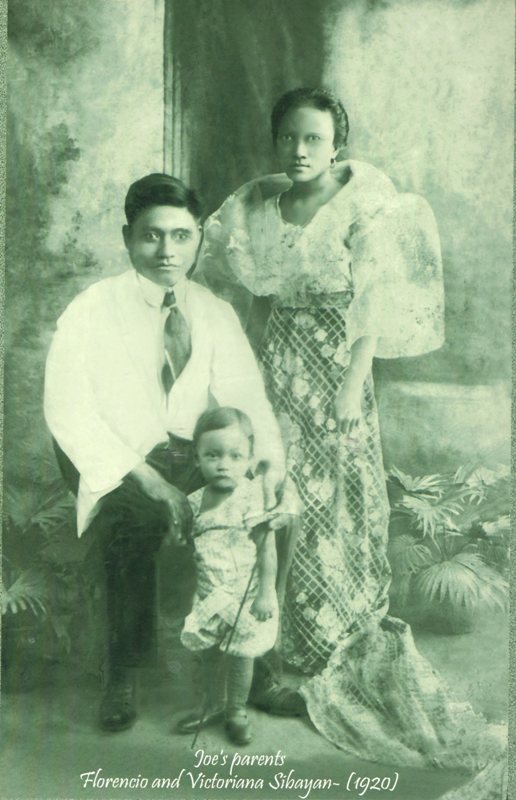 Father had lots of chickens and raised fighting cocks.  He used to ask me to hold the tail of a rooster and face it towards his rooster as we pulled them back when they tried to fight each other.  This was done to strengthen their legs, and we did it many times.

Then we would pit one rooster against each other to find out the best for Sunday’s cockpit bet.

Other cockpit aficionados or fanatics would come and buy Father’s fighting cocks because they learned that Father’s cocks were winners (ganador).  Sometimes they would borrow one of his cocks to bet on and give him a share of their winnings if they were lucky.

I often accompanied Father on Sunday afternoons to the cockpit, carrying one of his roosters.  And so I witnessed several cockfights, a very bloody affair, when I was young.

At the age of 5 I was already bringing around one of our roosters, seeking a neighbor’s cock to fight with.

I even went far away from home to a neighbor’s yard to sic my rooster against a bigger one.  When my rooster was chased and flew over a yard, I had a hard time chasing it.  I was brushed by thorns and twigs until I caught the rooster and brought it back home.

That same rooster later on became a “ganador”, or a winner, five times.

One day this rooster got out of its leg strap and flew across the street into the yard of our rich, powerful neighbor, Don Ciano Barcena.  It fought against his tied rooster and nearly killed it.  Don Ciano was so mad he caught our rooster and removed all its feathers.

When Father saw what happened, he just smiled and let the matter pass on as if nothing happened.  He continued to be friends with Don Ciano.

I still remember that during Sunday mass Don Ciano and his friends would go out when the priest mounted to the pulpit, to smoke their cigars and chat.  After the sermon was over, he and his companions would go back to their chairs.

It was in their house where I for the first time tasted CERYSA NEGRA, during the wedding of his only child, Manang Moring, to Manong Pitong, a bachelor from another province.  Theirs was the greatest wedding ever celebrated in Bangued.

Their orchestra came from Vigan and the guitarist was my cousin Mg. Ganing Sibayan.  He passed to me a bottle of cerveza which I drank and found out that it can make one dizzy and sleepy.  I was only 6 then.

When the fighting cock called “Ganador” finally died in its last fight, we found out that it had three testicles, one of them a black one.  No doubt it was a fearless fighter!

The meat of this rooster was tough but it tasted good!  Mother always cooked the fighting cocks of Father that died during a fight, but it took a long time for her to make the tough roosters’ meat tender by boiling.

Tatang either came with a live rooster, with money and a smile, or with a dead rooster, with empty pocket but still with a smile!  Praise the Lord!

He never showed any worry on anything.  It was Mother who did most of the worrying.

Whenever one of Father’s cocks got injured in a fight, he would nurse it back to health by putting iodine on the wound and taking care of the rooster like a baby.

The only cause of any misunderstanding between Father and Mother was the very noisy cocks that got to Mother’s nerves.  It is because when a hen lays eggs and starts making noise, shouting “PUT PUTAK!, then all the ten roosters of Father joined her in chorus and there was bedlam in the house!

It is more understandable when one knows that the roosters and hens and chickens were all raised under our house!

Bobby’s poultry are far from his house.  Praise the Lord!

Father assigned me to feed his chickens every day.  We had lots of corn produced from Mother’s farm inherited from Grandfather.

It was also my duty to pick up the chickens before sundown and place them inside a chicken nest with the mother hen so that they would not be eaten by lizards or wild cats.

In the morning I would let them loose and feed them.

My favorite drink was a glass of “sarsaparilla” (Coke) stirred with egg and a little wine.  It is called “ponce,” or punch!

But although we had a lot of roosters and hens, we seldom ate eggs, because Father wanted them to be hatched.

We only ate eggs following an illness to regain our strength.

I still remember when we were so poor my mother divided a small egg between me and my brother for breakfast with our rice.

Hence, we were often sick, due to lack of proper nourishment then.

The heavy rains flooded the rice paddies where we … END_OF_DOCUMENT_TOKEN_TO_BE_REPLACED

In the month of May when the rains started … END_OF_DOCUMENT_TOKEN_TO_BE_REPLACED