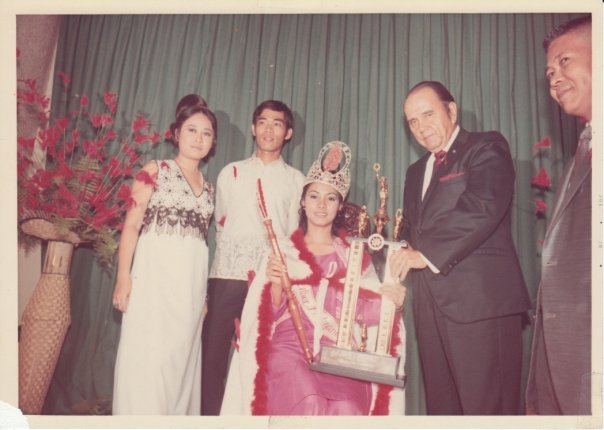 Governor Petronilo Seares attended a conference of all City Mayors and Provincial Governors in Manila.  A resolution was passed by them to hold a National Beauty Contest for Miss Red Feather Philippines to raise funds for all charitable institutions in the Philippines.

Immediately upon returning to Abra, he convened a meeting of all ranking provincial officers, municipal mayors, and heads of civic organizations.  They agreed to support the resolution but had a problem:  WHO WOULD BE MISS ABRA TO REPRESENT THE PROVINCE?

According to Edwina Entaile (Wina), there were several suggestions made.  Then she approached one of the Mayors and suggested Jojo’s name.

Jojo was elected as Miss Abra right away!  She would represent Abra in the National Beauty Contest.

One morning there was a heavy knock at our door in 1-A Stanford Avenue, Cubao, I.C.  When we let the stranger in, he introduced himself as the Abra Provincial Treasurer.  He showed us a signed Resolution petitioning us to allow Jojo to become Abra’s candidate for Miss Red Feather Philippines.  We looked at the Resolution and saw that it was signed by the Governor, all Provincial officials, municipal mayors, the Jaycees, Knights of Columbus, etc.

As Pat later on said:  Never in our wildest dreams could this happen to us – Siniong and Patring – of very poor families of Abra; what can we do but to accede to the unexpected petition.

The picture of Jojo was published as Abra’s candidate in the first canvassing of votes for the candidates.  She garnered first place!  It was a big surprise.  Why?  Because Pat and Fina dropped around ₱2000.00 worth of votes.

Where did we get this money?  At that time one peso was still worth $0.25.  Now $1.00 equals ₱28.00 (1994).  That was a lot of money then.  The people of Abra thought I was being paid in dollars as a U.S. employee aside from my pension as a retired officer.  They also thought I retired as a Colonel!  Why?  Because as early as 1950 I was already a Captain and a Lawyer.  They addressed me or introduced me as either Attorney or Colonel SIBAYAN.  (Pat and I used to touch each other.)

When the people from different provinces, municipalities, schools, hospitals, and other civic organizations getting USAID help found out about Jojo’s candidacy, they asked me for booklets of votes worth ₱1000.00.  One vote was ₱1.00.  It had a prize to be raffled, consisting of a car, a TV, refrigerator, bicycle, radio, and an accident insurance policy of ₱2000.00.

Pat was depositing thousands of pesos every week out of sales of tickets bought by those whom I helped get USAID properties from the bases.  She deposited around ₱17,000 in all for Jojo’s votes.

We placed our names in those votes, including our relatives and friends because they were returned and paid by the booklets from people of many provinces, as far as Tawi-Tawi in the South to Batones Island in the North, who had benefited from USAID.

One ticket was in the name of Oscar Aparri, Pat’s nephew.  He was killed as a student of Abra Valley College.  I was able to help his mother, widow of Rogue Aparri, get the insurance money.  She stayed at home from Mecarearmay until we were able to have the insurance company pay her ₱2000.00.

On the second canvassing of votes, Jojo was again first, with Pat and Fina dropping ₱5000.00 worth of votes.  She became very popular among the Abranians.  During the annual meeting of Abra Historical Society in Manila, she gave a speech, which was very much applauded by the audience, urging them to support her candidacy as Abra’s miss.  (The speech was written by an Ateneo Priest Jojo was working for as his secretary.)

Before the final voting, we were invited to be present in Bangued for a Home-coming of Abranians, headed by AHA President, Procopio Borsomeo, a famous Philippine guitarist and a U.P. professor.  His daughter was elected Miss Abra during a Valentine’s Ball in Manila which we attended.  The selection was by tickets sold.

At Tañgadan we were met by a car entourage with beautiful leis placed around our necks as a gesture of a warm welcome to Jojo and her family by the Province.

When we arrived in the Abra School of Arts and Trades building where the Home-coming program was held, we were greeted by the Master of Ceremonies, Vice-Governor Aquino, who introduced Jojo and her family saying:  Manong Seniong has helped Abra with around $150,000.00 worth of equipment from USAID, where he is the Property Officer.

It so happened that the Provincial Commander, Phil. Constabulary, a Colonel who was my student officer in the Phil. Constabulary School, was on the stage.  When he saw me, he came down and saluted me smartly, saying:  SIR, DO YOU STILL REMEMBER ME, YOUR STUDENT IN THE P.C. SCHOOL?  Everybody clapped and applauded our presence upon arrival.  It was a standing ovation for Jojo — and her family — by all the Abranian Balik-Provincians and prominent people of Abra.

The son of Congressman Barbero whisked away Jojo to his car and took her to the radio station, where she delivered a speech.  We did not hear her speech, as we were busy in the Home-coming Program and later on in the newly built mansion of Congressman Carmelo Barbero and Mrs. Mary Valera Barbero halfway on Casamata Hill, overlooking the town of Bangued.

Professor Borsomeo tried to adjust his accompaniment.  I guess he was not familiar with that new song.  After several attempts at accompaniment, Jojo took the guitar and said:  SIAK LHENGEN TATA.  (I’ll just do it, sir.)  And she did so, to the great surprise of the crowd, who applauded her tremendously, not knowing that she was a radio singer in Manila and was a guitarist, too!  JBS

We were taken to Borobor, the source of the water supply of Bangued.  There we swam in the swimming pool.  I brought my snorkel with me and I surprised everybody who had not yet seen a snorkel.  Very few went into the icy pool with cold spring water coming from high up in the mountains.

Our next tour was in the Alzate Farm, where all kinds of orchards and trees were growing.  While resting under a tree, two mehis entwined together fell on the bamboo bed we were lying down on, much to our surprise and fright!

It seemed as though every family in Bangued became our relative because of Jojo’s popularity.  Everybody wants to be with a winner!

During the eve of the last canvassing for votes, all the mayors of Abra, headed by Governor Seares, came to Manila to lend their support.

We called on Congressman Barbero in the House of Representatives, who was very happy to welcome us.

He asked if we had any chance to win.  Governor Seares assured him that we would, what with the backing of the entire Abra people.

Meling (his nickname) turned to the Governor and Mayors and asked:  “WHO AMONG US CAN PUT THAT MUCH?”

Nobody made any answer.  Then he got his wallet and counted out ₱500.  He handed the money to Petroning (Governor’s nickname), saying:  ONLY THIS MUCH CAN I AFFORD.

I was not present during the last voting and canvassing in the Red Cross Building.  Pat and Fina accompanied Jojo there.

Then all of a sudden an entourage of Abranians arrived, headed by Governor Seares.  They all had bulging pocketbooks in their hands.

With a booming, loud voice, Petroning said:  HERE WE ARE, JOJO, TO SUPPORT YOU.

This intimidated the backers of the other candidates, who no longer gave much fight.  They were beaten by ABRANIAN PSYCHOLOGICAL WARFARE.  I guess they planned this strategy to make Jojo win, Pat said.

At the final counting of votes, Jojo’s votes were almost double the votes of the second place winner.  The runner-up to Jojo was Miss Meglaya of Le Union Province.  The Manila, Cebu, Rizal, and Davau candidates of rich cities and provinces were far behind!

Later on Carmeling said:  “La Union may have their Miss Moran (Miss Universe), but we also have our Miss Sibayan (Miss RFP).”

He also added:  “Abra may be a Class IV province competing against Class I provinces and cities, but look, when we are united, we can beat all of them.”

After the canvassing we were given a suite in the Manila Hilton, the best hotel in Manila then, where Jojo stayed until her Coronation in Manila Hotel.

There was an earthquake while we slept in the hotel.  We saw a crack on the door of our room.  The earthquake was intensity IV.  We have picture slides while there.  Meals and bouquets of flowers were sent to our room.  We all slept with Jojo in the hotel room until coronation day.

Luis Lontok, Jr. (Nonoy) was Jojo’s escort.  But before the coronation, there was a presentation of candidates in the Phil. Am. Insurance Conference Room.

There Jojo wore a Tinguian dress, the native dress of Abra, just as other candidates wore their own native provincial dresses.

Fina and her younger sister, who looked like Jojo, only shorter, were there with us.  Many pictures were taken.  Jojo was very elegant, statuesque, and well poised and beautiful and tall.

They were called one by one for interview and to be viewed.  All of them were beautiful, coming from the Visayas, Luzon, and Mindanao provinces of the Philippines.  They represented the modern FILIPINO, all college bred!

Then came the night of all nights! – The Coronation Night in Manila Hotel Pavilion.

The candidates were paraded with their escorts one by one before the winners were announced.

Vice-Governor Paterno Aquino was there to represent Abra, with Mrs. Mary Valera Barbero, the Congressman’s beautiful wife.  When I greeted her, she stood up to kiss me.  I was a bit surprised!  But she was my ideal beauty when I was a fourth year student of CSE.

Tony Bañez, my high school classmate and close friend, had an illegitimate child with her.

Meling may be first in the hearts of Abranians but he was second in the heart of his wife.  But they have beautiful, intelligent, and successful children.  After he died, their house on Casamata was an abandoned house.

Jojo was awarded a crown, a scepter, a marvelous huge trophy, a wardrobe of clothes, and money for her world tour expenses.

The heavy rains flooded the rice paddies where we … END_OF_DOCUMENT_TOKEN_TO_BE_REPLACED

In the month of May when the rains started … END_OF_DOCUMENT_TOKEN_TO_BE_REPLACED