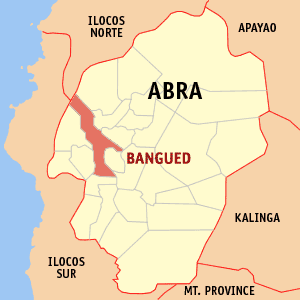 Social life revolved around religious activities such as baptisms, marriages, birthdays, deaths, fiestas and church going on Sundays and Holidays.  The church was, therefore, the hub of social interactions.  There friends, enemies, lovers and strangers met on Sundays and Holidays.  No doubt the people were peaceful and practically knew one another.

The town plaza was centrally located, surrounded by public buildings.  East of the plaza were the market, elementary school building and the municipal building.  South of it was the Church and the Conventos of the priests and the nuns and the Catholic schools.  West of it was the Constabulary barracks and the Provincial Jail.  To the north were the Provincial Building and the Post Office under the house of Governor Virgilio Valera.  The plaza was the place for the Provincial Fair during the town fiesta on Feb. 22nd.  It was there where political rallies were held and where entertainments like “sarsuela” and “komedia” were played.

The market, east of the church building, consisted of a big ACASIA tree in the middle surrounded by a wall so that it had only one entrance facing the church.  Meat vendors had elevated benches on the north side.  Cloth vendors were located on the south side with benches on the ground.  The west side was occupied by pottery vendors.  These arcas were shaded with a  roof but the middle part was shaded only by the big spreading acasia tree.

The middle was occupied by vegetable and fruit vendors.  Fish vendors occupied a part of the northern shaded area.  The vendors in the middle displayed their goods inside baskets on the ground where they sat on a stool called “bangkito,” or squatted in front of their goods.  Every vendor was busy driving away flies that swarmed the market.  The whole market area was paved with small river stones except the shaded or roofed areas which were surfaced with clay.

At that time women did not wear panties and so the women squatting in front of their baskets of goods had to fold their “pandiling” or long skirt between their legs.  The market had no toilet.  People had to go to one corner to relieve themselves.  Aside from the flies, dust would fly in clouds when a gust of wind would blow inside.

When the people went home from the market at noon time, I used to pass inside the market on my way to school after lunch to search for fallen coins.  Often times I picked up a centavo here and there or a nickel in the place where they sell clothes and meat.  Passing bare footed in the area where salt and salted fish or “bagoong” is sold makes the feet feel funny as the salted dust enters between the toes and makes it watery.  But a centavo or two more than compensated for the discomfort.  Anyway, my daily allowance was only one centavo, or sometimes none at all, to buy a cake during recess.

The marketplace was eventually transferred in the later part of the Thirties to Konsiliman.

The KAINSIKAN or Chinatown was along the street west of the churchyard going down the slope near the creek.  Both sides starting with the store of my Godfather, Bernardino Torrijos, on the left or south and the store of the Brilantes family on the right or north, down to the Navarros and Valeras are stores selling groceries, clothes, etc.  Felix Brilantes was my classmate.  He married Cleopatra Bilgera, another classmate and established the biggest store and hotel building in the heart of Lucena City after the war.  His Chinese father wore a big jade bracelet.

Another Torrijos store was located along the street going to the High School near the Banez Pharmacy.  It was owned by the father of Cecilia Torrijos, my former classmate, one of the beauties of Bangued as she had a light complexion and a beautiful smile.

A story is told about the Chinese, named Katang, who was accused of impregnating his young maid and he answered: “PONGEL, PONGEL, SINO TARAKEN MANOK, HINDI SIDA ILOK?”  (“Talk, talk, who raises chickens that does not eat eggs?”)

There was a Chinese store under the house of Don Ciano Barcena owned by “SODAK KABKAB.”  He was a dirty Chinese who was always dozing.  He kept his money inside a rusty cracker can near his bars of soap.  He also sold wild honey which I liked to eat.

The sastres, or tailors, were few and mostly located east of the town.  They were Tata Anding Bandayrel, my uncle, and Manong Tinong Valencia.  Along the same street further north was a tailor, not native to Bangued, who had a beautiful daughter whose family name was Reparial.  He lived in the neighborhood of my classmates, Margarita Bersalona and Leo Bernandes.  At that time only those public employees and teachers and well-to-do people had tailored clothes.  To show that we were public school H.S. students, we were required to wear khaki pants in school as a part of our uniform with white shirts.  I had my pants ordered by installment payments by my parents although it cost only $1.  But $1 was the equivalent of four day’s minimum pay then.

Nana Ulli Aparri was a famous tailor for boys and ladies clothes.  She was my mother’s best friend and later on became my mother-in-law.  She also lived in the east near the house of Tata Kinio Basuego, our town “herbolerio.”

The shoemakers were also few.  They lived west and north of the town.  Down the road of the KAINSIKAN was Mariano Tuazon who later on became a Sheriff and owner of the first movie house in Bangued.  He had a very intelligent son, Ham, who was also my classmate in Grade 1 and got promoted ahead of me.  Another shoemaker, Mr. Viado, was the father of my classmate, Roman, another intelligent student.  In the north going towards Tayum was LAKIEN, who wore a man’s coat and a woman’s shirt.  I didn’t know if she was a man or a woman, because she spoke like a woman but had a beard like a man.  He/She was also a shoemaker.  She was called ILLIANG also.

But there was only one slipper-maker in town, my father Florencio Sibayan.  He had the reputation of making slippers that lasted a “life-time.”  I guess this is very true because when they dug up his bones they found out that his slippers did not decay, according to my step-mother.

The bakery of Tata Andong and Nana Dora Bayabos was the only bakery up to the Thirties when the Venus Bakery in the west was opened.  The Bayabos Bakery was along the street in the east near the tailors.  Hence, every morning people in town trekked to the bakery to buy bread for breakfast.  The bakery also sold lechon at noontime once a week.  The bread dough and bread mould were all made by hand.  I saw Nana Dora preparing the dough until late at night and I saw Tata Andong baking the bread very early in the morning.  But their homemade bread was very tasty and we ate them with coffee minus butter.  To sandwich condensed milk in their warm bread was my favorite delight!  As a matter of fact my late father’s last wish before he died, according to Pat, my wife, was bread sandwiched with condensed milk, which he got as his last meal.  No doubt my children wanted to eat bread with condensed milk or ice cream!

The pharmacy in Bangued did not exist until the early Thirties.  It was owned by Major Urbano Banez with his daughter, Lita, as the pharmacist.  It was there where we could buy condensed milk, toothpaste and leeches (alisnatek) for reducing blood pressure.  Later on the Valera Pharmacy was opened in the east with Manang Conching Valera, later on Mrs. Purugganan, as pharmacist.  It was located in the store of Don Bienvenido Valera, Ex-Mayor, and got burned with a lot of pharmaceutical items stored in their ground floor.  The smell of burned medicine was unusual.  Our house almost got burned, but by the grace of God, the fire was not fanned by the wind towards our bamboo house.  There was also a bamboo warehouse containing cans of petroleum and gasoline between our house and the burning house.  It was miraculously spared by the wind turning the flames to the opposite direction!  I saw my father perform a super-human feat by picking up our foot-pedaled Singer sewing machine and running away with it to a safe place.  It took two people to carry it back later!

Doctors were seldom consulted except in times of grave or serious illness by the rich.  Our “doctor” was Teta Kinio Basuego who had a cure-all medicine of herbs and prayers.  The only doctor I knew as a child was Dr. Romas, father of my classmate Clementine, a very intelligent student.  They lived in the west, while Dr. Trullence lived east of the Long (Elementary) Building.  Dr. Purugganen lived in the north towards Tayum.

The dentist that I knew was Tata Siding, who lived across the stream near Pagpartian.  He drilled and extracted teeth without anesthesia then.  I hated to go near him!  Another dentist who came to town later was Major Soliver of the P.C. He was a very imposing figure in uniform.  Nena, his daughter, become my camadre later on when I became a god-father of their youngest son in Quezon City.

Politicians were looked upon with respect by the people and with awe by the children as they rode around town and were surrounded by their constituents; and as they delivered fiery speeches in the town plaza after a brass band concert.  There were only two rival parties then: the Valera faction and the Paredes faction.  Don Virgilio Valera was then the Governor while Don Quintin Paredes was the Congressman.  The town Presidente (Mayor) was Don Bienvenido Valera.  I used to ride the Valera truck carrying their streamers shouting with other children to “Vote for Valera!”  then came the eating before elections where voters and non-voters, even children, flocked for the tasty lechon, chicken adobo, suman and pancit.  My father was a Valera voter because Don Benido was our next-door-neighbor.

Government officials held their positions with pomp and dignity; wearing coat and tie to office with leather shoes.  Captain Galineto was the Provincial Commander, P.C., while Lt. Eufemio was the C.O., P.C.  How I envied them in uniform, especially in church with their white uniforms!  They attracted great attention as the sentinel announced their arrival with a rifle-clicking salute!

The heavy rains flooded the rice paddies where we … END_OF_DOCUMENT_TOKEN_TO_BE_REPLACED

In the month of May when the rains started … END_OF_DOCUMENT_TOKEN_TO_BE_REPLACED