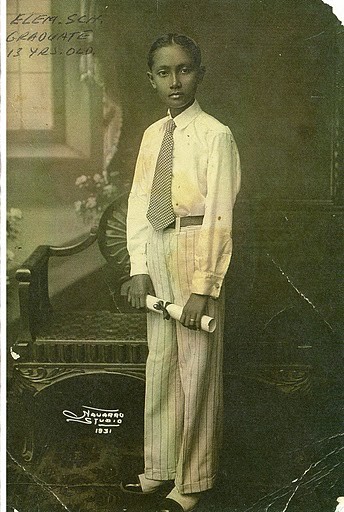 I saw how lonely father became after mother’s death but he took his loss bravely with that usual smile for anything that happens.  He fell in love with a beautiful young employee of the La Flor de Pita tobacco factory of Don Juan Valera and got married.  That was when I was 2nd year in H.S. in 1933.

My uncle Lt. Bravo visited us and suggested that I enroll in the H.S. in Bayombong, Nueva Vizcaya, his new Constabulary station.  Father agreed.  There I changed my name from Patrocinio to Jose upon my enrollment in 3rd yr H.S.  My wish to have a bicycle was fulfilled when my uncle gave me the new bicycle won by my auntie.  I used it to go to school.  During rainy days I rode in a horse-driven carriage (Calesa) driven by a Constabulary soldier to school with my cousin, Manang Maming, who was my classmate.

This is the turning point of my life, from “rags to riches”, from obscurity to popularity, from a low-down-trodden profile to a higher self esteem and to an awareness of my boyhood and manhood stage in life.  I felt differently, I felt like a real MAN!

But living with relatives is quite different from living with one’s own parents.  All my words and actions were guarded and not spontaneous.  I can’t be equal with my cousins in the eyes of their parents.  I and my older cousin, Manon Baddong, who like me is from another family, felt our treatment as those of servants by our uncle and aunt and their children.  We both come from poor families.

Mg. Baddong’s father, Silvio, an older brother of Tata Anton, was the farmer in charge of Kinaber owned by our rich Uncle Anton.  Kinaber is a large tract of land bounded by mountains and rivers planted with rice, corn, coconut, cotton, sweet potatoes and vegetable plants.  Cows, pigs, chickens, ducks and horses are raised in this farm.

The heavy rains flooded the rice paddies where we … END_OF_DOCUMENT_TOKEN_TO_BE_REPLACED

In the month of May when the rains started … END_OF_DOCUMENT_TOKEN_TO_BE_REPLACED