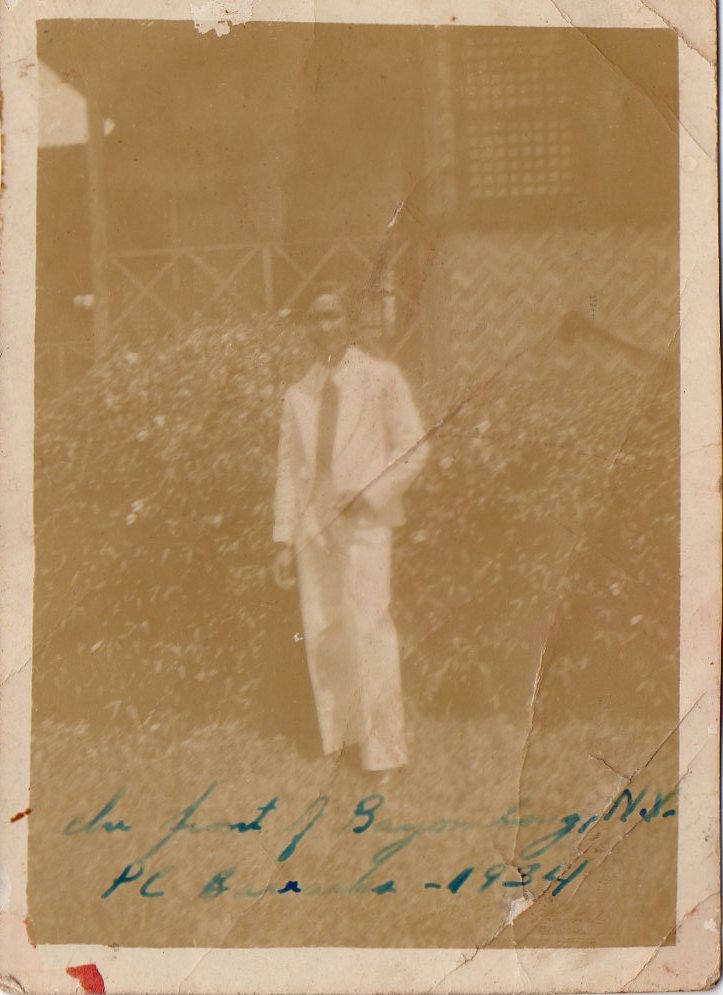 When I returned to Bangued from Bayombong, Uncle gave me the bicycle.  I was so happy and proud to own one and I used it to commute between Bangued and Palau, where I worked as Public Works laborer, using pick and shovel with a wheelbarrow to widen the road opposite the properties of Fina’s grandparents.

Our work was from sunrise (6:00 A.M.) to sundown (6:00 P.M.), with an hour break at 12:00 Noon.  It was a back-breaking job for a frail 16-year-old boy like me but I had to earn for my matriculation and tuition fees in the high school.  Father’s business barely made both ends meet.  We sometimes only had bananas and rice for lunch.

I went to work with the two brothers of my stepmother, Gielo and Simon, who were older than me.  I guess I was the youngest in that road gang.  Our Capitan was Tata Marcos Bersamira, who I found out later was one of the killers of the two sisters whom they robbed of gold bullions.  He was a government witness.  The Vasquez sisters called Rosa Balitok were known to have gold bullions they dug from their lot and were robbed and killed by their own cousin and his companions, together with Tata Marcos.

The two brothers of Nanagig Isiang were killed during Word War II fighting as guerillas against the Japs.

My earnings as a B.P.W. laborer were just enough to pay my entrance fees as a fourth year student in the Colegio del Sagreda Corazon High School, Boys Department, for class 1934-35.  With a part of the earnings, I bought an alarm clock and a belt.  Being a minor, I was paid only ₱.40 (20 cents) a day.  At that time one cent was equivalent to two centavos.

I had to sell my bicycle to buy books and clothes and a pair of shoes.  Out of the sale I also bought a tennis racquet and a pair of worn-out balls from Judge Rivas, whose shoes I used to shine when I was a shoeshine boy.

I started using my name JOSE in Bangued in 1934, although everybody called me Siniong.

We were all boys in our class of around thirty students.  Our principal teacher was Rev. Lawrence Leissing, SP, from America.  He was a Marine during World War I and after his discharge became a priest, with the Philippines as his first station after his ordination.  He never returned to his hometown in Cincinnati until he died in the Christ the King Seminary in 1979.  He was my idol then.

Our school was under the Convents of the priests east of the church.  We prayed before the start of each class.

The girls had their own high school department in the Convents of the sisters west of the church.  They had been having their high school much earlier than that for the boys.  It was there where Mg. Trining graduated in 1931 before Mother died.  Ours was the second graduating class of the high school boys’ department, in 1935.

During our graduation program I was the one who gave our class prophecy as Class Prophet.  We had a drama depicting the life of St. Alonso and I was the one who played the role of the saint.  I have a picture using the black “sutana” or vestment of Father Leissing.

Our Valedictorian was Felix Claustro, who became a performer in the St. Louis University of Baguio City and also became a lawyer.  He married the Valedictorian of the girls’ department, Ambrosia Coriño.  Their daughter is a lawyer married to Vicente Valera, Governor of Abra.

Our Salutatorian was Ramon Viedo.  He died very young while studying in Atenio de Manila.  I was an Honor Student, together with Florencio Artinda.  My best friend, Pastor Benedito, was my classmate.  He died in 1992.

The heavy rains flooded the rice paddies where we … END_OF_DOCUMENT_TOKEN_TO_BE_REPLACED

In the month of May when the rains started … END_OF_DOCUMENT_TOKEN_TO_BE_REPLACED