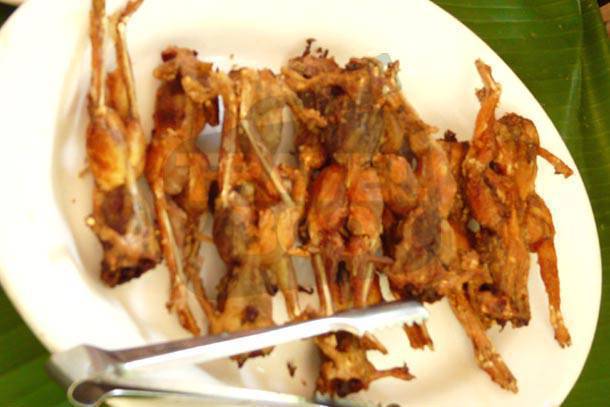 In the month of May when the rains started falling, the rice paddies became full of water.  Dry season was over! Rainy season had set in. Our evacuation site was flooded!

Food had become very scarce.  We had been out of town for five months, eating what we had stored for rainy days.

Our relatives from Paitan ran out of food supplies and came begging from us some of our rice palay.  We gladly gave them, because, after all, we had lived in their house as evacuees until Pat’s mother died and the town was bombed.

Had we continued living with them, leaving our palay in town, we could have starved.  Praise the Lord!

Their youngest son and his wife also came to join us in Apad and built a hut near ours.

One evening we heard the noise of frogs in the rice fields.

Everybody got a lantern to hunt for the delicious “manna from heaven.”  I used a piece of tire for lighting and, with Boy, went to catch the elusive slippery creatures.  Not being accustomed to catching frogs, we got only a few of them on our first night. We got more and more as we gained experience in catching frogs.

Pat dressed the frogs, fried them, boiled them, roasted them, and dried the rest in the sun, salted and marinated them.

At last, we were tasting another kind of food than dried carabao meat or dog meat.

One early morning at about 4 o’clock, I woke up to a concert of frogs’ mating noise near our house where there was a pond.

I went out with my light and found out that at that time the frogs were mating.  Instead of picking up helpless frogs one by one, I was picking up two at a time, one on top of the other!

The heavy rains flooded the rice paddies where we … END_OF_DOCUMENT_TOKEN_TO_BE_REPLACED

In the month of May when the rains started … END_OF_DOCUMENT_TOKEN_TO_BE_REPLACED