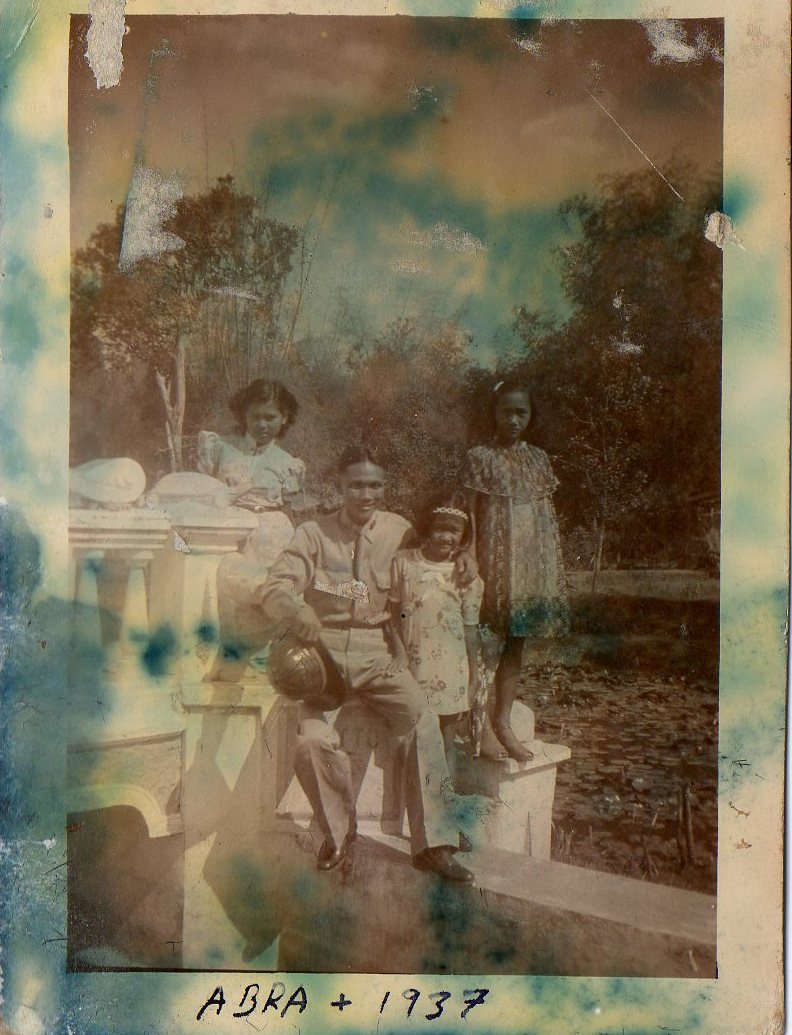 In order to continue my studies in H.S., I had to work and earn my money for matriculation and tuition fees.  Father’s slipper making business slowed down following my mother’s death.  I joined the Public Works Road Gang earning P0.45 or less than $0.25, a quarter of a dollar a day.  I was the only one riding a bike to work from Bangued to Palau.

We worked from six to six with an hour’s break for lunch between 12 PM – 1 PM.  There was no 8 hour labor law then.  It was a back-breaking job with pick and shovel and steel-wheeled wheel barrow.  We were widening the road at a mountain or hillside opposite the property belonging to Don Juan Valera.  I worked all throughout summer vacation.  With my earnings, I was able to save money for my H.S. enrollment with extra money to buy an alarm clock and a leather belt.  Father helped me with the rental of my books in 4th year H.S.  To save time in going to school, I enrolled in the nearby CSC, Catholic High School for Boys.  There I used my new name, Jose, for the first time in Bangued, although everybody called me Siniong.

When I needed money to buy my shoes, clothes, and a suit, I sold my bike.  I had extra money to buy a second-hand tennis racket and a pair of old balding tennis balls from Judge Rivas.  It was a Spalding racket with a slot in its handle.

It was in Bayombong that I learned tennis.  My uncle, who played it, used me as his sparring partner.  There we used rackets of steel frame and steel strings.  Our net was also made of steel wires.  Hence, our tennis balls lasted very fast, also, considering the fact that at that time the “slice” stroke was in vogue, every backhand and forehand was a chop.  We call this way of playing, “araw ni Bonifacio.”  My beautiful cousin, Manang Susing Bravo, also used me as her sparring tennis player in Bayombong.  She played well.

In Bangued, I continued playing tennis with my friend, David Barza, during summer vacation at noon time when nobody was using the tennis courts at the east side of the Provincial Building.  Our tennis balls were bald without felt coating and were so light, like racket balls!  It is because we could not afford to buy our own balls, first or second-hand from anybody.

When I played tennis, nobody told me how to hold the racket properly, how to look at the ball until it hits the racket, how to first go into position before hitting the ball, and how to hold the top of the racket above the level of the elbow when hitting the ball by going down on bent knees.  It was the late General Alfonso Arellano who gave me these basics when he taught me “better tennis” in Camp Olivas in 1951.

And so my tennis ability remained mediocre even though how much I played or practiced tennis.  I made up with my running ability what I lacked in skill.  But I continued to enjoy playing tennis until now.  Those who played power tennis, like my idols, Felicisimo Ampor and Cesar Carmona, who are about my age, quit playing ahead of me.  Carmona developed arthritis, while Ampor had a triple heart bypass, according to his son, Mel Ampor.  They brought tennis to its highest point in Philippines history!

My last school year and residence in Bangued as 4th year H.S. student in 1934-1935 is replete of many nice memories that I can vividly recall.  It was the first time in my school life that we were all boys in our class and all our teachers were male, including a priest, Fr. Lawrence Leisring, our Principal Teacher.  Having female classmates seemed to be more thrilling than a class devoid of “inspiration,” especially at age 16.  One can argue that it is also devoid of “distractions.”

We always prayed as a part of our school ritual, at the start of our school hours.  There was a state of holiness in our school demeanor to the extent that I even considered becoming a priest, only that I did not know how to go about it.  I presumed that only exceptionally intelligent and rich students are acceptable to enter the Seminary.  But on second thought, I guess that God’s plan for me was to raise seven beautiful, wonderful children for His glory.  No regrets!

I used to go to the Valera Pharmacy at night to read the Manila Times, especially the Comics Section.  It had Jack Swift (like Buck Rogers), Hairbreath Harry, Tarzan, and Mutt & Jeff.  Nita (Juanita Valera) was then 2nd year H.S. and had difficulties solving her Geometry homework.  She asked me to help her, which I did every day.  I inserted little love notes in her Geometry book, but she never responded.  I had no chance to ask her response because we had an understanding that I just pick up her book in the Farmacia and then return it with solutions to her homework.  In 1949 we took the Bar Exams to become lawyers.  When the results were published in 1950 I failed to see her name.  She never took it again I guess.  After the exams she expressed much hope of passing compared to my doubt about passing.  She failed, I passed!

Two events happened when I returned to Bangued.  My stepmother gave birth to a baby boy who was baptized Vicente (Inty).  I loved carrying him in my arms.  He was a very cute kid who looked more like his mother than his father.   The other event was the marriage of Manang Conchang Valera to Manong Pacoy and later on the birth of their first child baptized Josefina (Fina).  I used to carry her in my arms too.  She is now my daughter-in-law, Josefina V. Sibayan.

After my graduation, I was at the dead-end of my progress in life, because there was no way I could continue my studies in college like my rich friends and classmates.  My uncle, Remigio Bravo, asked me to join him to a trip to Manila, which revived my spirit, because I could realize the dream of my late mother which never came true.  She used to say, “No laketoi nakitc ti Manila uray mataya con.” “If I could only see Manila, I am ready to die.”

We rode a passenger truck that traveled day and night on dusty roads.  I climbed to the roof of the truck, which served as baggage container and spent the night wedged with the luggage, watching the moon and the stars.  We stayed in a house which had its ground floor rented by a Chinese grocery owner selling sari-sari items.  Our food morning, noon and evening consisted of rice and eggs.

One day I walked all the way from Plaza Goiti up to the Philippine General Hospital where Mg. Trining was enrolled as “pensionado” in the Nursing School.  Fortunately, she was permitted to see me and she was so excited and surprised to see me, asking me how I got there.

It was then that I saw a radio set consisting of just a piece of quartz stone, a needle and a headphone.  It was there in Manila where I saw for the first time a TRAMVIA or streetcar.  It was there too where I rode for the first time an elevator in the Post Office building.  Tata Equio and I stayed for around a week in Manila before we returned.  I was so excited and impressed by what I saw, especially the tall buildings and crowded streets.  How I wished my mother to be able to see what I saw before she died.  Then I considered myself more fortunate than her!  And I also more fortunate than my father, who has only heard about Manila, but has never seen it at all.

I was so grateful to my uncle, who was so kind enough to take me along with him to the Capital of the Philippines – Manila.  I recall my childhood ambition of seeing Manila, America, then Heaven.  Those were my dreams.  Now I’ve realized the first two and I am ready to see the third and last ambition of my life, Heaven!  Praise the lord.

The heavy rains flooded the rice paddies where we … END_OF_DOCUMENT_TOKEN_TO_BE_REPLACED

In the month of May when the rains started … END_OF_DOCUMENT_TOKEN_TO_BE_REPLACED